In this project a method is proposed for automatic loading of objects on a swinging conveyor trolley with an industrial robot. The robot tracks the swinging motion of the conveyor trolley using computer vision. 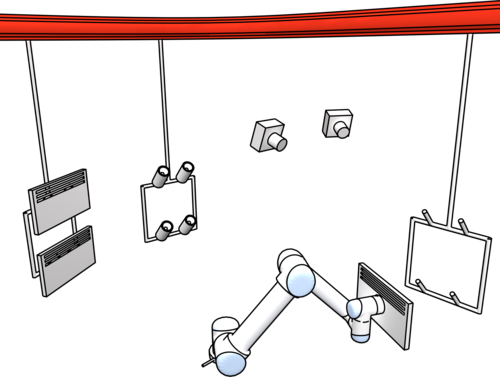 A conceptual sketch of a station for loading of parts onto a swinging conveyor trolley.

An industrial robot manipulator picks up objects and places them on the hanging trolley. It is assumed that the conveyor belt can be stopped temporarily during loading. The main challenge is therefore to compensate for the swinging motion of the trolley and for the unknown orientation at the loading station.

An experimental set-up was built at the laboratory at the Department of Production and Quality Engineering at NTNU. It consists of a conveyor line in the roof, two cameras and a robot. The conveyor is of the type power & free, which means that individual trolleys can stop at stations without stopping the entire conveyor line.

The two cameras continuously delivers images to a computer over Ethernet. The images are processed on a computer to generate set-points for control of the robot. The robot is a UR5 from Universal Robots.

The laboratory set-up with two cameras and a trolley suspended from an overhead conveyor.

The conveyor trolleys used in the experiments are welded from steel cylinders or steel bars. This makes it natural use a visual model based on edge detection for visual tracking. The W frame is stationary while the B frame is attached to the swinging trolley. It is necessary to estimate the rotation matrix from the W frame to the B frame in order to control the robot.

A particle filter is used to estimate the rotation matrix using the continuous stream of images from the two cameras. The cameras deliver 1024 x 768 pixels 8-bit images at 35 Hz

Camera kinematics. The origin is the same of both the B frame and the W frame. The rotation matrix from R to W is computed from the state vector of each particle.

In this experiment the goal is to demonstrate delivery of panels on the swinging trolley. A vacuum gripper is mounted on the robot end-effector in order to grab the panel.

A SMS120 vacuum gripper from UniGripper, with a vacuum generator and an exhaust silencer.

The videos below demonstrates the proposed method.

In this experiment the robot delivers cylindrical objects on the swinging trolley.

The cylinder is carried by a gripper mounted on the robot end-effector. The distance between the cylinder inner diameter and the swinging trolley is approximately 5mm.

In this experiment the robot executes the following motion:

The end-effector in the initial and final position.

The video below demonstrates the proposed method.

Detection of panels on the conveyor trolley

The video below shows a sequence where a panel is moved between the two loading positions on the trolley. 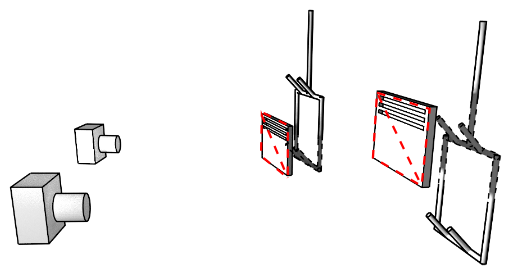 Parts of the trolley becomes occluded when the panel is in position.

Estimation of the mass center position

As mentioned above, the W frame is stationary while the B frame is attached to the swinging trolley. The kinematics of the trolley is described using Euler angles, as shown in the image.

In the video below the proposed method estimates the vector of static parameters θ, i.e. the parameters that describes the position of the mass center of the trolley. 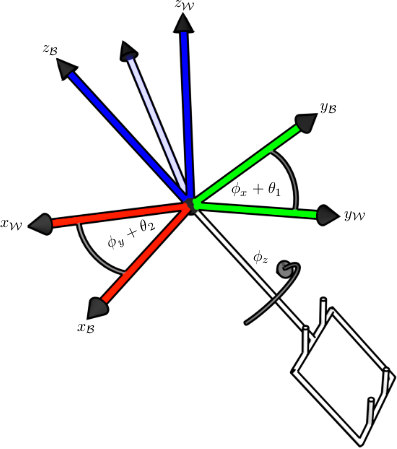 Kinematics used to describe the orientation of the rotating trolley.